A traditional Mexican meal, these tamales are quite the hearty dinner! This post shows how to make tamales and links to two different fillings.

I obviously love food. And I have a lot of traditions that revolve around food, esp around the holidays. Christmas Eve I basically repeat Thanksgiving (here is my Thanksgiving e cookbook), Christmas morning I usually make my Liege Waffles, but sometimes we make Cinnamon rolls, or Eggnog French toast.

And for Christmas dinner we have Tamales! Now tamales tend to take some work and they are easier to make with multiple people. Luckily for me we do Cousin Christmas a week or two before Christmas and my Brother in Law, sister and I make a huge batch of tamales!

We set up an assembly line – Chelsea (my sister) makes the masa dough mixture and creates the balls. I flatten the balls and add them to the corn husks and my Brother in Law fills and folds the dough and stacks them in the steamer.

We steam half an enjoy them for dinner that night and we freeze the unsteamed ones to take home and cook up Christmas night! Then we all make gingerbread houses together. I love Cousin Christmas.

And of course I make tamales during the rest of the year as well. It’s never quite and fun as making them with the family, but still delicious. My kids are learning to make them with me though which is also super fun and a great tradition.

Just take me to the best Tamale Recipe already!

If you’d rather skip my instructions on how to make tamales, along with links to other Mexican recipes and get straight to these delicious tamales – simply scroll to the bottom of the page where you can find the printable recipe card.

To make these Tamales you’ll need

If you love these recipes as much as I do, I’d love a 5 star review. Be sure to share on social media and tag me if you make it @ashleemariecakes! If you want to stay updated on new recipes sign up for my newsletter and join my Facebook Group!

If you love Tamales you’ll want these with them!

To watch me make this Tamale dough and the fillings play the video in the recipe card. There will also be a short teaser video auto-playing. 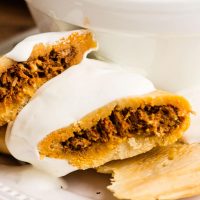