This tomatillo sauce is easy to make and tastes amazing. The tartness of the tomatillo chicken filling is perfect for chicken tamales.

How I learned to make Green Chicken Tamales

My Grandma grew up in Mexico, she lived there until she was 20, so I have a lot of great mexican recipes she taught us. But Tamales were one of the things she never really taught us!

The first time I ate a Tamale I was 20 and living in AZ and bought a bag of tamales in a parking lot – they were DIVINE! I had to learn to make them!

My Brother in Law lived in Mexico for 2 years and as a fellow foodie he also wanted to learn. So when one of my cousins married a gal who grew up making the best chicken tamales in the world we couldn’t wait to learn!

So this recipe is from my Cousins wife’s mom – how random is that. And now my Brother in law, sister and I make them every year for Christmas dinner and usually again in the summer.

Tamales are a time consuming dish but 100% worth it. While I’ve made them many times alone it’s always faster with an assembly line.

Chelsea (sister) makes the masa and masa balls and dries the corn husks, I flatten the balls and place them in the corn husks, and Shawn (my brother in law) fills, folds and stacks them. We have an amazing system down and it takes barely any time now!

We fill the pot with tamales and while round one is cooking we assemble round two of the tamales and freeze them to steam fresh tamales at home later.

Just take me to the Green Chicken Tamale Recipe already!

If you’d rather skip my tips and tricks for tamales, along with links to other recipes and get straight to these delicious green chicken tamales – simply scroll to the bottom of the page where you can find the printable recipe card.

How to make Tomatillo sauce for Chicken Tamales?

The sauce is basically a green tomatillo sauce. When picking your tomatillo at the store grab the ones where the husks have burst open and you can see the tomatillo.

The husks grow before the tomatillo so if you by a closed husk you might not be getting a full sized tomatillo inside.

Start the tomatillo sauce by peeling the husk off the tomatillas and rinse off the sticky film. Make sure to wash your hands really good after too, it can burn your eyes.

Slice the tomatillo in half and place on a tray – I like to use silpat mats so they turn easily. We’re going to roast them to bring out a better flavor using the broiler in your oven.

You are also going to add the peppers to the tray to roast. I’ve used fresh cayenne peppers, dried red peppers and jalapeno peppers.

My brother in law prefers the dried red peppers, I prefer the fresh cayenne, but use whatever you like – just consider the strength of the peppers, you’ll use less jalapeno peppers than you would cayenne.

Brush or spray the tomatillos and peppers with oil then broil for 8 mins unti the skin side starts to blister then flip and broil for another 5 mins on the other side.

Then add them to a blender or food processor. If your using a stronger pepper only add one to start with and as you puree the sauce add more, tasting in between.

Add the garlic, salt and cilantro and puree – then once your happy with the taste stir the sauce in with some shredded chicken. I bake my chicken breast then shred them but you can boil them or even use rotisserie chicken.

To make these Tamales you’ll need these supplies:

If you love these tamales as much as I do, I’d love a 5 star review. Be sure to share on social media and tag me if you make it @ashleemariecakes! If you want to stay updated on new recipes sign up for my newsletter and join my Facebook Group!

We serve these Chicken Tamales with these other recipes!

To watch me make this Chicken Tamale Recipe play the video in the recipe card. A short teaser video should be auto playing. 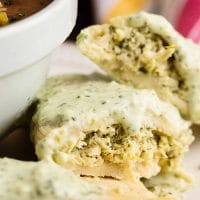