So the party was last week but I’m a bit behind on my posting!  BUT it was a great party and I’m SO excited to show you the fun 5th Lego Indiana Jones party we had for P, Lego Boy.  Everything turned out well, but I did suffer from a lack of sleep and missed a ton of pictures!  Crazy!!!!  Well here’s what I have.

Remember the Lego Indiana Jones invitation?  I know it was a long time ago.  I made it weeks ago in order to give it to Lego Boy’s preschool classmates before they got out for the summer.  Well as of 2 days before the party out of 19 invitations I had only heard from 1 person!  Let’s just say I was not sure how much of anything to make???  Luckily I heard from 7 more people in the 24 hours before the party and was able to better guess the numbers that would show up.

Here is the Food table.  I had water bottles, candy and..  THE CAKE!!!  It was so much fun to make!  I tried to make the cake layers represent different parts of the first level of the Lego Indiana Jones game.  It’s also the first adventure of the first movie.

You can see the Stone Face on the bottom layer, the Cave entrance on the 2nd layer with THE stone rolling down the hill, and the Fertility (not that the kids knew that) idol on the top layer.  I also included from the game the white spikes, the different colored coins, the ferns and the extra life hearts.  Lego boy LOVED it! 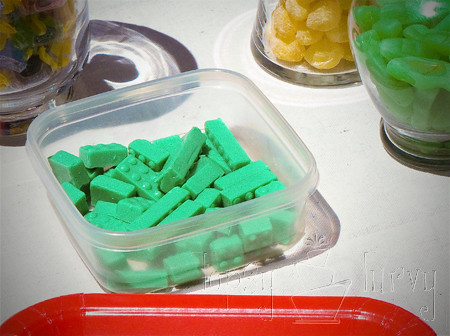 As part of the candy I made some Lego shaped hard candy, marshmallow flavored!  It’s always nice to get more use out of my homemade silicone mold!  Using the same mold I also made the favors, homemade Lego soap and homemade Lego crayons!  Although it got so hot that the crayons started to melt so we had to move them off the table pretty quickly.

We had an Indiana Jones obstacle course.  It started with a HUGE grey exercise ball that “chased” them down the hill at the side of the house.  It ended with a Play crawl tunnel filled with plastic bugs, and then a JUMP over the rubber snake pit!  Since ended up having all girl guests they didn’t LOVE it they way Lego boy did.  He and the other three kids enjoyed the obstacle course over and over again before the party started.   And all that matters really is that the birthday boy loves it right?

The one thing that was the BIGGEST hit that I totally forgot to take pictures of was a “dig” that we made.  We took some change and other “treasures” and mixed them with some plaster of paris.  Then the kids, using hammers, dug them out of the dried plaster.  I was surprised that it was so popular, but glad they had so much fun with it!
On the other table we had the dozen Indiana Jones Satchels

I pulled these images from the Lego game off the internet, I printed 12 of each image off and we hid them all around the yard!

We did a treasure hunt and when they found an item they glued it into their journals!  No one found all 12 items but a few of the guests found 11 of the 12 items!

The journal fit perfectly into the satchel (as well as the other favors, the soap and crayons)

The one thing that Lego Boy insisted on was a pinata.  He’s been talking about the pinata about as long as he’s been talking about having a Lego Indiana Jones birthday party.  I went through a ton of different ideas and ended with a Crystal Skull.  I used a basic balloon shape for the pinata.  Then to decorate I painted it white, drew on HUGE eyes, a small nose and long teeth (with a black sharpie) and ended with a shiny silver spray paint layer.  It actually turned out better than I expected, but it did NOT turn out well in any pictures.  I mean terrible.  I’m not sure if it’s the fact that it’s so shiny or what, but these pictures are BEYOND bad!  A new camera has moved WAY up my “to buy someday” list…