I’ve been crazy busy MAKING a ton of fun projects and recipes!  I’ve been on a roll and have been having so much fun!  I have so much to share with you, and I’m starting with sharing the tutorials from this silver sequins and gumpaste flowers wedding cake a few months ago!  Sequins today, flowers up next! 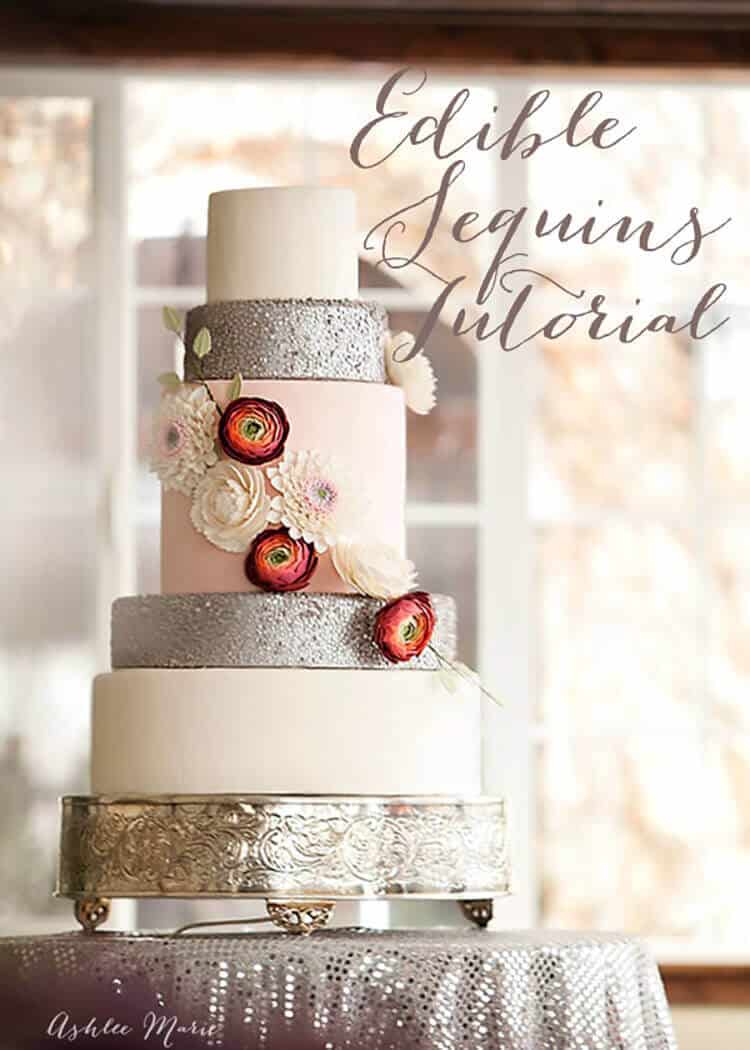 I have been in LOVE with the metallic cakes, especially the sequined ones, I’ve seen all over Pinterest.  So when the opportunity arrived to design my own cake I couldn’t WAIT to give it a shot! 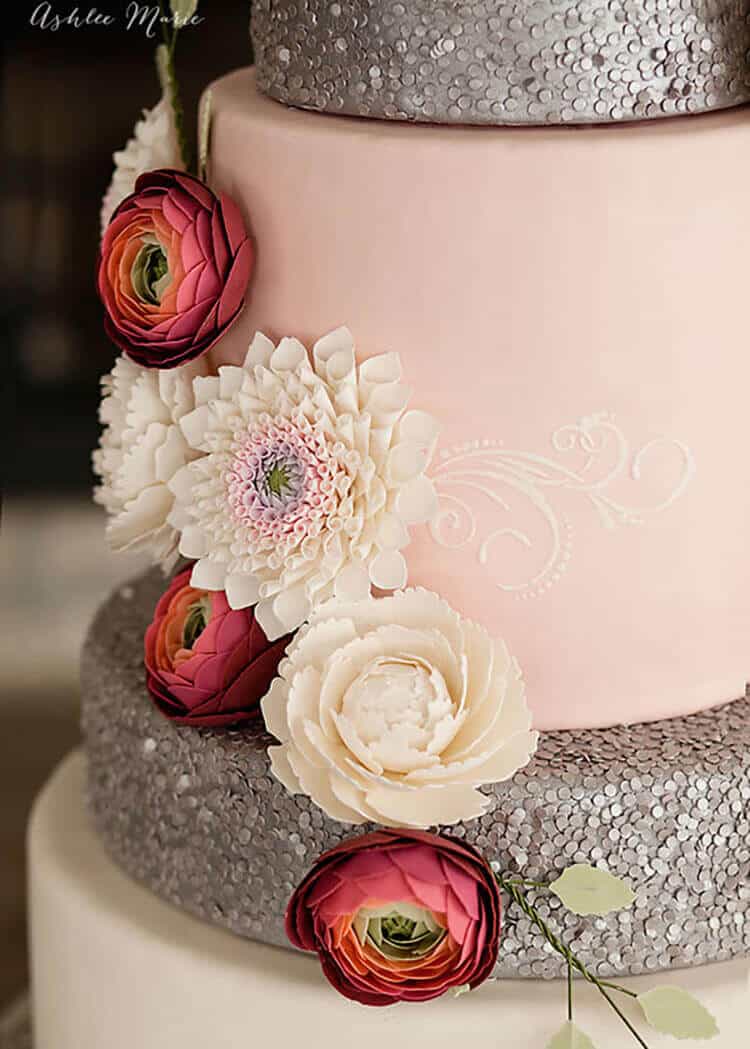 It took some playing, a few fails, but I’m really happy with how it went!  I hope you guys enjoy the tutorial and I’d LOVE to see pictures of any cakes you create using this tutorial! (or if you find that something else works better for you)

So first I tried rolling out a gumpaste/fondant mixture (white).  Then I tried airbrushing it- no bueno, the silver spray paint was like BLUE, NOT silver like I wanted. 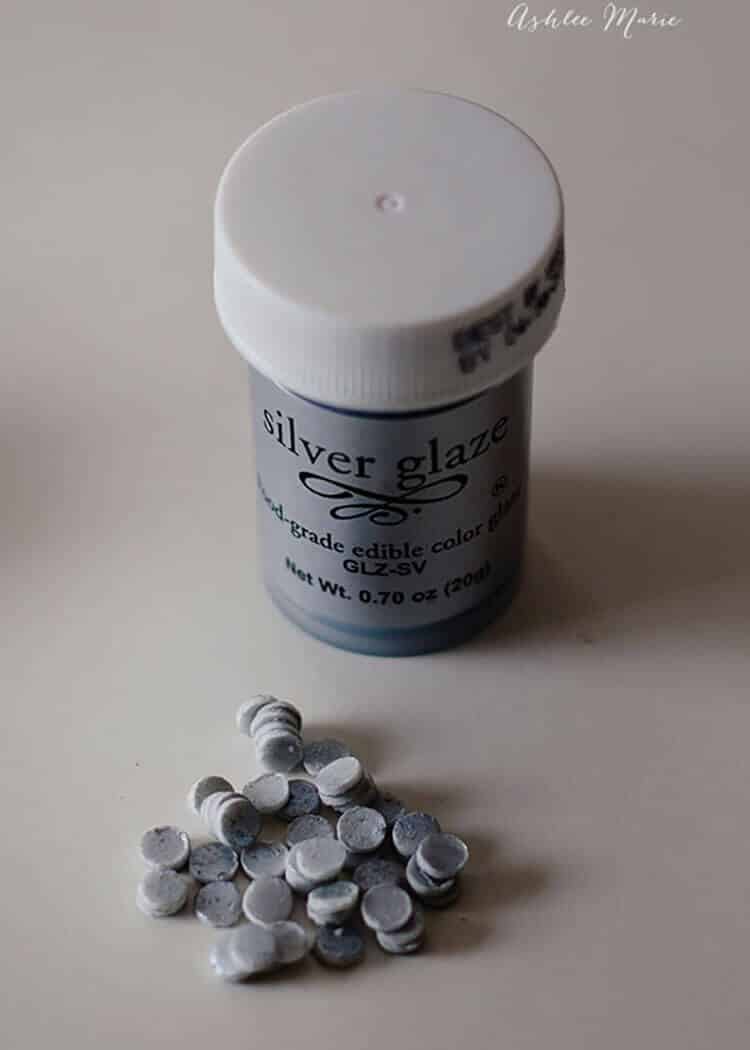 So NEXT I rolled out more white and painted it with this silver glaze.  It was a nice shade of silver with a great shine.  BUT the problem with the glaze is trying to paint a second coat messed up the first coat, but I didn’t love just one layer.

BUT I continued on, I let it dry then cut out a ton of circles using a round tip.  FAIL – 1. it took forever, and they kept sticking together, and 2. the edges were WHITE, I didn’t want to take the time to paint each edge, boooo, so nope. 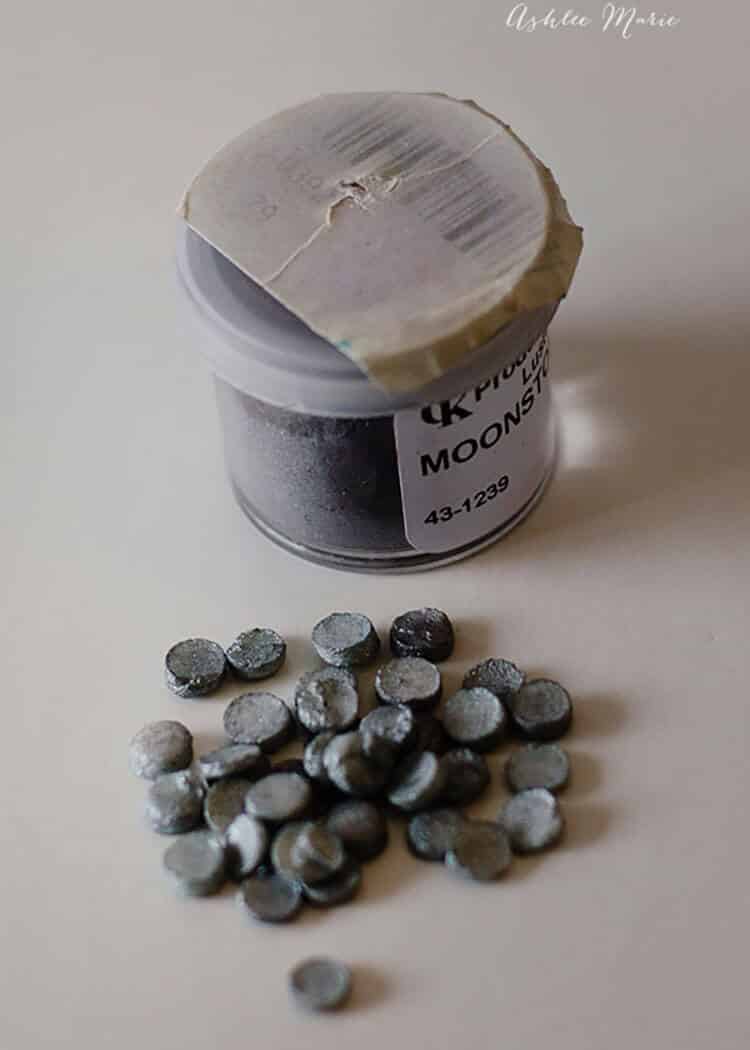 Next up I tried luster dust!  I figured this would cover the sides of the sequins better.  So I rolled the white gumpaste/fondant mixture out, cut the circles then spread it out.  I then poured them into a baggie with luster dust and shook them all around!  This covered all the sides great, BUT it didn’t get shiny!  It was dark and dull, and didn’t reflect the light the way I wanted the sequins too! BOO 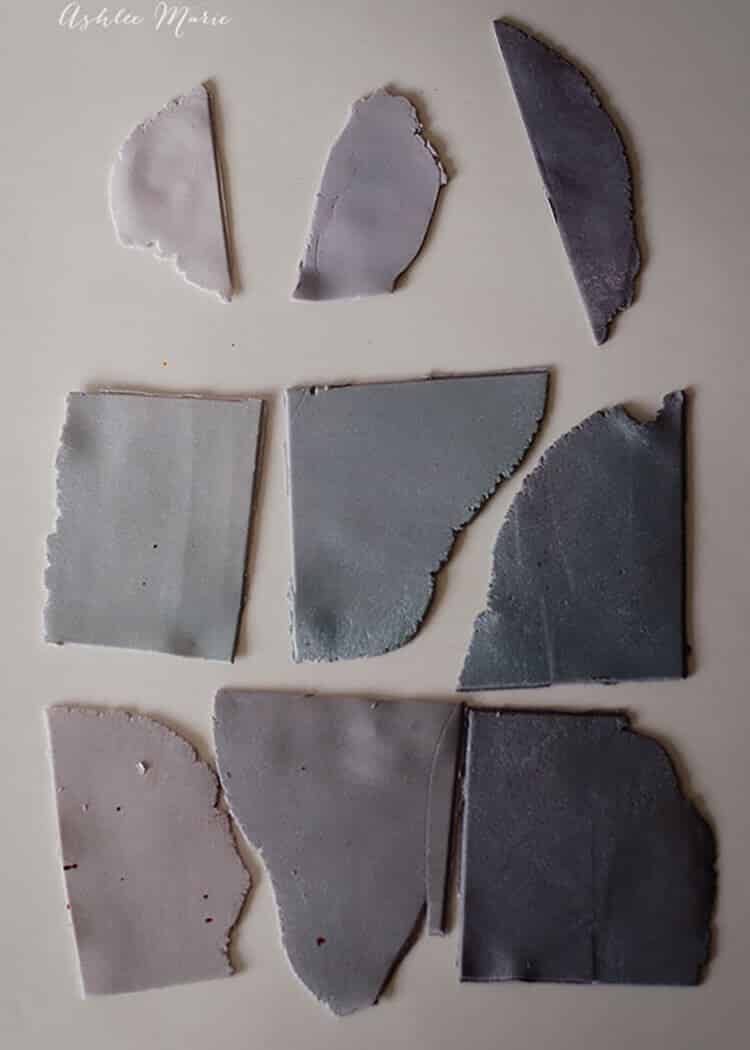 FINALLY inspiration hit, what if I put the sequins ON the cake then sprayed them?  I still had the problem with the airbrush silver paint looking BLUE.  So instead of spraying WHITE fondant/gumpaste I decided to try GREY gumpaste/fondant.  ALSO to counteract the BLUE in the silver I added a BIT of red and gold (orange-y counteracts blue).

Then I rolled out three different shades of grey, then spray painted the samples with the plain silver, a little of the red/gold and another batch with more red/gold.  Then I took them outside and decided which look I liked the best (I liked the medium grey with the silver with just a TAD bit of the red/gold. 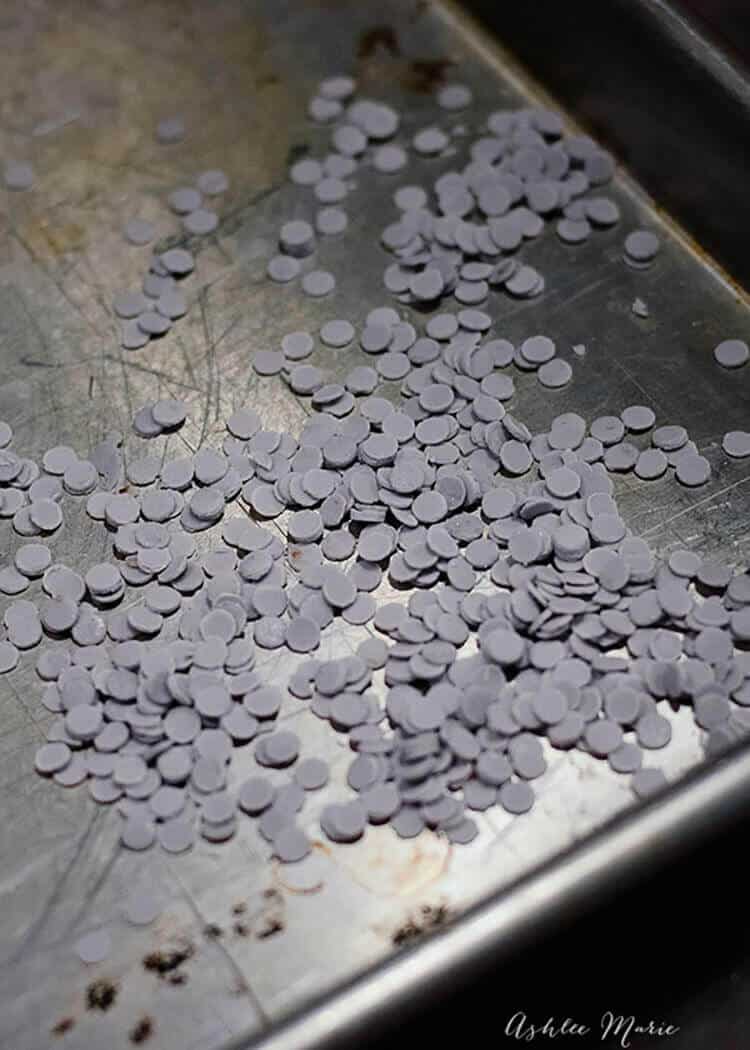 WINNER!  Now came the time consuming part.  Mixing the gumpaste/fondant mixer, dying it all grey and then rolling it out into a TON of sheets and cutting out MILLIONS of circles.  I started rolling out multiple sheets, letting them dry a bit, flipping, then drying a bit more.  Then I stacked the sheets so I could cut 4 at a time.

My finger still KILLED by the end AND it took so much time I spend a few DAYS doing this and still wish I’d  had more.  ANYWAY.  Once you cut them out, spread them out and let them dry.

Next up cover the cakes with the same shade of fondant, then to get the fondant tacky you can either brush it with clear vanilla/vodka OR I ended up using my steamer on my cake to get it tacky (love my steamer!!!).

I steam a section at a time then using the same technique as this sprinkles cake I cover it with the circles working my way around.  Pressing it into the cake a bit (that’s where the fresh fondant on the cake but dried circles works best).  I will say that this is the same color of fondant, the dried circles faded, the result is still great.

I wasn’t happy with one layer so I let it dry, steamed it and did it again.  I WISH I had enough circles to do a THIRD round.  BUT alas, I didn’t have enough.  I will for SURE do more next time, esp the edges.  I think vodka would work better than the steam, I’ll try that too. 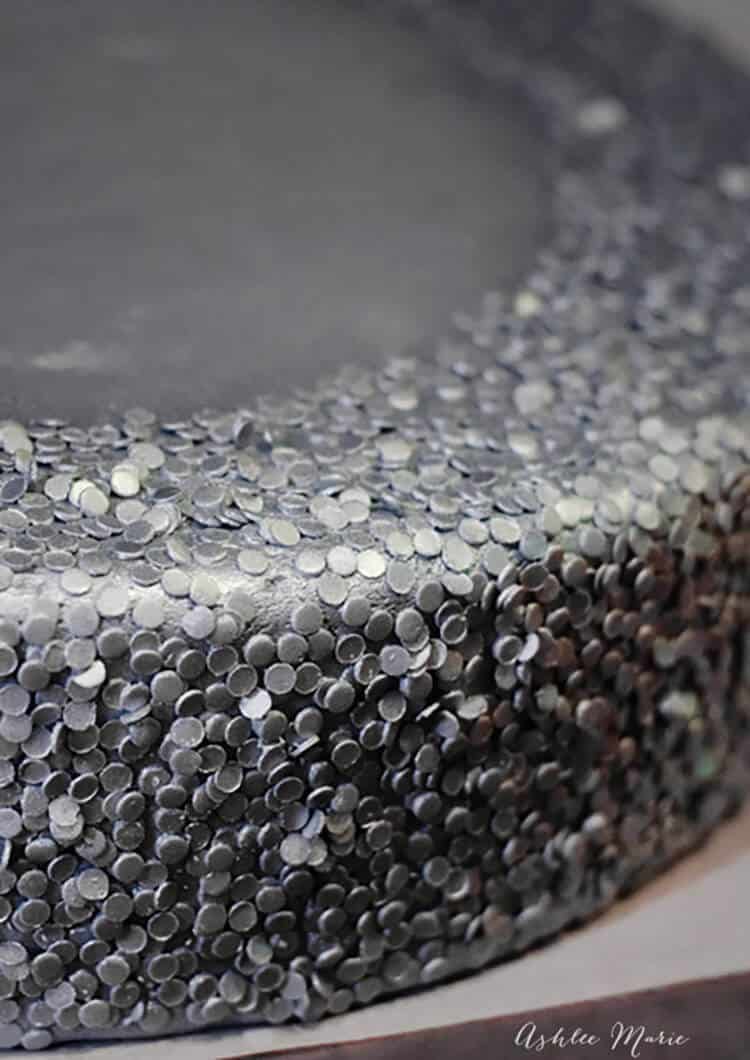 THEN I used the silver (with a BIT of red/gold) and airbrushed the whole thing!  YAY, It’s starting to come together!!!  I love how it colors the sequins AND the fondant underneath. 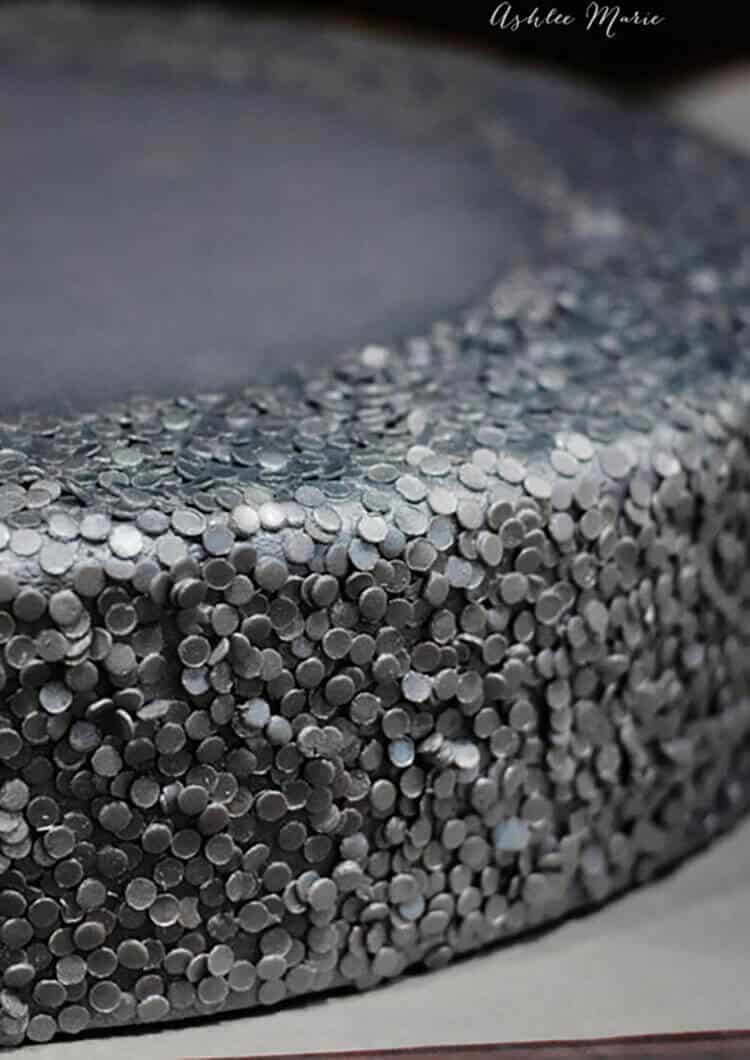 Second layer of airbrushing!  LOVE!!!  It’s not QUITE as glossy shiny as I wanted, but I am SOOOO happy with how it looks!  The end result is to DIE for and the whole cake looks AMAZING!  I can’t wait to try it in gold as well!  Maybe a bronze? 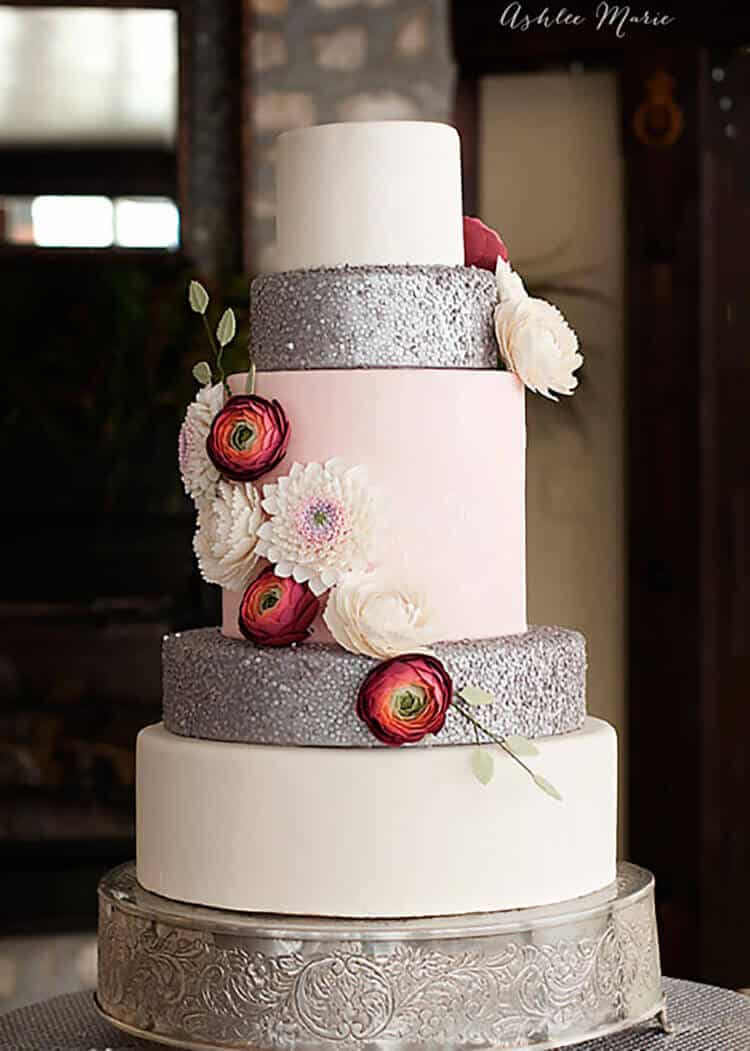 What do you think? What tutorial from this cake do you want to see next? Stenciling on a cake? Or the Peony’s, Ranunculus or Dahlia’s?