Apple pie is amazing and so are homemade donuts. Together they are perfection! Everyone loves apple pie filled donuts with a cinnamon glaze.

How I created this apple pie baked donut recipe

Remember back when I was on Food Network? Well one of the challenges was donuts – while everyone else was making themed cake donuts I was the crazy one who made raised donuts.

I have always loved fluffy yeast donuts, esp filled! That extra bit of flavor in the middle of the filled donuts is amazing! In the past I’ve made Maple bacon and S’mores filled donuts.

So when I was trying to think if a great filling for the fall and then I remembered this amazing apple pie filling recipe I have! PERFECT! Then dip the donuts in a cinnamon glaze and you have an amazing donut!

Just take me to the apple pie donut Recipe already!

If you’d rather skip my tips and tricks for homemade donuts, along with links to other donut recipes and get straight to this delicious apple donut – simply scroll to the bottom of the page where you can find the printable recipe card.

-the secret to a light and fluffy donut dough is not to add too much flour. And then knead it long enough that the dough has a good stretch and isn’t too sticky.

-when you roll out the dough to cut the donuts make sure you roll them thin and cut twice as many circles as donuts you are making (so for a dozen donuts cut 24).

-after cutting the circles add a little bit of water around the edge of half of the dough circles, this will help the two halves stick together.

-scoop a Tbsp of the filling onto the same circles as the water, then top with the other half of the circles of dough.

-squish and press the edges together so they stick together and the dough stretches out a tad bit so it’s larger than the round cutter.

-now cut the doughnuts again. This will seal the donut halves together and keep the filling in.

If you love these apple donuts as much as I do, I’d love a 5 star review. Be sure to share on social media and tag me if you make it @ashleemariecakes! If you want to stay updated on new recipes sign up for my newsletter and join my Facebook Group!

Is it donuts or doughnuts?

Doughnut is the original and official spelling and donut is an american creation that caught on when “dunkin’ donuts” became popular.

In most official or professional publications they still use doughnut, but looking at google trends online donut is far and away the more popular!

If you love Apple Pie Donuts you’ll love these other homemade donut recipes!

To watch me make these donuts (Halloween style) cooking show style play the video in the recipe card. A short recipe video will be auto playing. 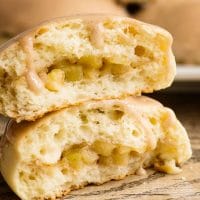