It doesn’t get better than breads! And cinnamon rolls are basically the best breakfast bread. By adding caramel pecan to the mix you have a sweet dish to start off any special day!

I think I’ve established over the years that I love sweet recipes. I love cinnamon rolls and have about 8 different flavors and versions I make.

I also love caramel so it made sense to make a caramel pecan version. Now these are not for the faint of heart when it comes to sugar.

They are sweet on top of sweet on top if more sweet. The rolls, the filling, the caramel sauce, and then the cream cheese frosting!!!

Maybe they started out that way, they also started out non-frosted!!! I mean I serve them for breakfast on special occasions but usually, I’d consider them a treat or dessert. A dessert I eat for breakfast but certainly not healthy…

Now October 4th is Cinnamon Roll Day AND my youngest birthday so clearly a breakfast food on that day.

How to get fluffy cinnamon rolls (not too dense or dry)

It’s all about getting the dough right. And what it comes down to is not adding too much flour. You want enough that the dough isn’t too sticky to handle but not so much that you end up with dry cinnamon rolls.

The biggest tip is don’t add all the flour at once. How much flour you need will be different depending on the humidity, weather and altitude of where you live.

That’s when you stop adding flour and just knead. Knead until the gluten relaxes and the dough is less sticky and when you stretch out a small bit it stretches vs breaks. This will keep your dough fluffy vs dense and tough.

Just take me to the cinnamon roll recipe already!

If you’d rather skip my tips and tricks for the perfect cinnamon roll, and get straight to baking this caramel pecan cinnamon goodness — scroll to the bottom of the page where you’ll find the printable recipe card.

Cinnabon rolls are larger than most at home rolls and they have a higher swirl to dough ratio than a lot of homemade rolls. I don’t focus on making the super large rolls because they are more than even I can eat, so I focus on the heavy swirl and filling part.

The larger you roll out the dough and the thinner you roll it the more swirls you’ll have. So a smaller rectangle means less swirls, less filling and more dough heavy roll.

Also don’t skimp on the cinnamon sugar filling for that ooey gooey cinnabon result. I like my butter and sugar filling fairly thick, it means more of a mess when cutting the rolls and plating them but it also means a more gooey filling – which is a win for me.

What does “double in size mean”

When the recipe says let rise an hour or until doubled in size which do you go by? Time or size?

Always go by size, things like the temperature in your house, weather and altitude will affect how quick or slow your rise is. To help me I take a picture of my dough with my phone when the rise first starts for comparison.

Remember the rolls will get wider and taller. The overall volume of the dough/rolls should double in size, that won’t mean they double in both height and width though. Just use your best guess.

The difference between frosting, icing and glaze

Now the biggest decision you have to make is – what do you top your cinnamon rolls with? Or do you leave them plain?

a Glaze is a mixing of sugar and liquid (water or milk) mixed thin enough to be poured and usually translucent and is super shiny. The consistency of thin corn syrup or a thick sugar syrup. Think of a glazed donut.

Frosting is made with fat and sugar and is whipped thick and fluffy. It is a thick spreadable consistency, not pourable. It can be spread on the outside of cakes and used a cake filling as well.

For cinnamon rolls I use a cream, cheese frosting, yes even with all that caramel, but some of my kids prefer it without so I do half and half for my family.

Can cinnamon rolls be frozen?

Like any yeast based dough you can freeze before either rise or after they’ve been baked. My favorite for cinnamon rolls is to freeze after you you have shaped the rolls.

Place the rolls you are going to freeze about an inch apart on a parchment lined tray and freeze. Once the rolls are frozen you can take them off the tray and place in side a freezer bag.

Squeeze out the air and double bag. They will be good in the freezer for 2-3 months. (Keep an eye out for freezer burn)

When you are ready to eat them pull out however many you want to bake and place in a baking tray, cover and let thaw and rise. It will take a few hours – depending on the heat of your house.

Or you can pull them out of the freezer, place in a pan (a pan you’ve added the caramel sauce too), cover and refrigerate, they will still thaw and rise but it will take much longer – a good option for pulling them out the night before and having rolls ready in the morning.

Will cinnamon rolls rise in the fridge?

YES! A refrigerator slows down the yeast so they rise much much slower. You can make your rolls the night before you want to eat them, cover then and let them rise in the fridge overnight.

NOW depending on the temp of your fidge they might not rise quite enough or they might rise a little too much. After some tests you’ll know just how long you can keep your rolls in the fridge and have them be perfect in the morning.

If they are under risen just leave them on the counter for a little bit to warm up and rise a bit more before baking. And the next time just start them earlier the previous day.

If they are over proofed what I do is press down on them a little. There really isn’t much you can do at this point, but bake them.

Remember that a slower rise in the fridge will often cause the dough to have a more yeasty flavor, which some people prefer but some don’t.

If you love these fair foods as much as I do, I’d love a 5 star review. Be sure to share on social media and tag me if you make it @ashleemariecakes! If you want to stay updated on new recipes sign up for my newsletter and join my Facebook Group!

If you loved these caramel pecan cinnamon rolls, you’ll love these other breakfast recipes!

To watch me make these cinnamon rolls in a live cooking show click on the video in the recipe card below. 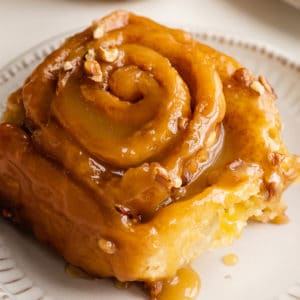