This party is actually from my oldest daughters 3rd birthday! So 6 1/2 years ago! WAY before I got into cake decorating and back when I only had 2 kiddo’s! We were living in Japan and had been for a year. So finding party supplies and baking supplies was a bit difficult. I had so much fun though! 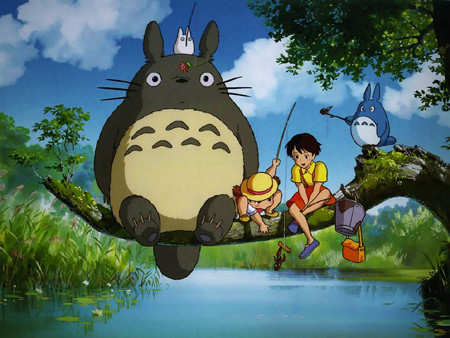 This party was not only her birthday but our going away party as well, since we were moving back to the states a few weeks later. We invited everyone from church, our apartment building and some of my husbands co-workers. My in laws were even in town, visiting Japan for the 2nd time since we’d live there, so it was a really fun gathering. 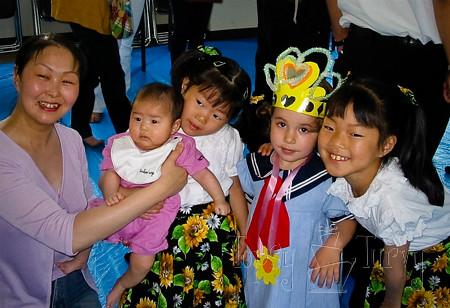 Even before living in Japan we loved My Neighbor Totoro and other studio Ghibli movies. While in Japan we were able to visit Tokyo and go visit Studio Ghibli! It was such a fun year. Out of the 32 places I’ve lived Japan was my number 1 favorite. I would move back in a heartbeat and stay forever. In my husbands last job he was actually hired for a permanent position in the Tokyo Office but before he finished training the economy crashed and they canceled overseas appointments and that’s when we lost our job. Having that hope of living in Japan and having it crushed made it all that much harder when he lost his job. I love our year in Japan and looking back at these pictures is wonderful and painful at the same time. 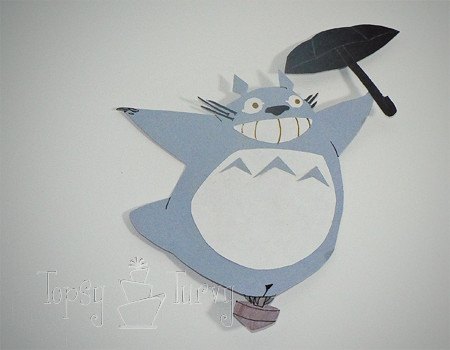 ANYWAY, when it came time for her birthday a Totoro theme seemed an easy choice! I handmade all the invitations. This is way before cricuts, so I cut out about 50 of these Totoro shapes and umbrellas! Then cut out the eyes, stomach and back. Then painted the whiskers, eyes, claw’s, etc… I also wrote out the Kangi for the invitation! I don’t actually read or write kangi, but my husband does, so he found the right kangi for me and I wrote it out. 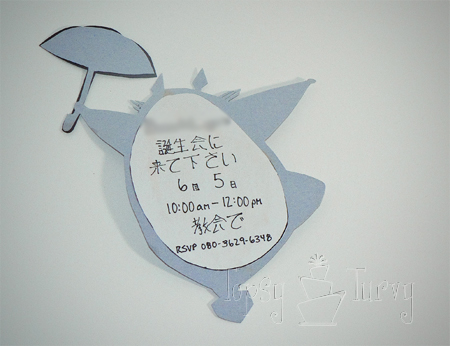 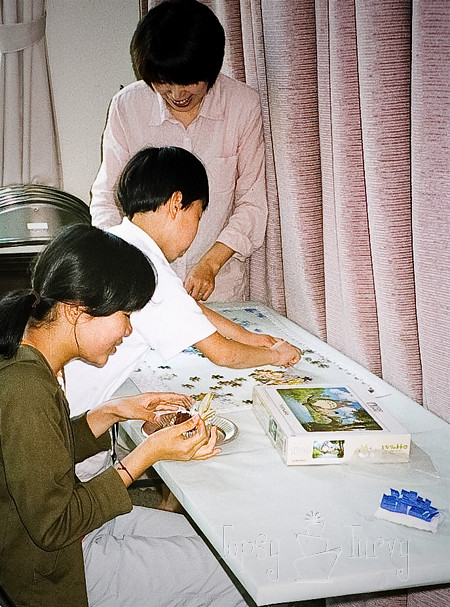 I also prepared some games that everyone could play. Since they do parties very differently in Japan they were all very excited to play some classic American party games. I started with my Totoro version of pin the tail on the donkey. I made a full sized Totoro. Since my supplies were limited to what I could find there I had to tape 16 poster boards together. I then pined it to my wall and started sketching. I penciled it until I was happy with it then painted him, leaving one of the chest markers blank for the game. This is a crappy picture, but it actually shows the poster boards pieced together best! 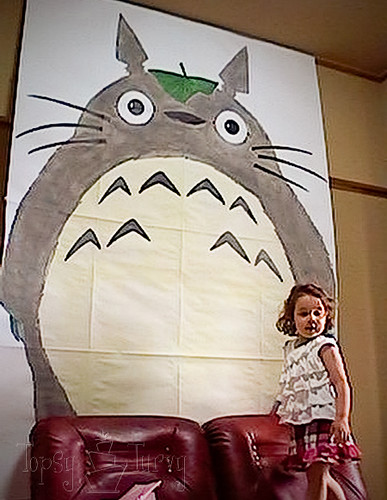 He was also a great decoration for the party room! He took up quite a bit of one wall. The movie is set in the forest so while I wasn’t allowed do TOO much to the room I tried to add tree’s to the walls and ceiling using paper and balloons! Overall I’m still pleased with how well it came together with what I could find! 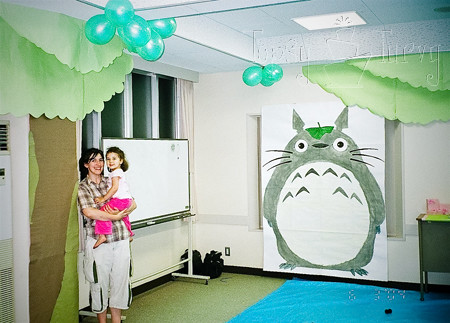 He was a little too tall for the birthday girl, but since 85% of the guests were adults tall was okay! He ended up getting bent into the wall. There weren’t any wall’s that were perfectly flat so it was the best I could do! Oh well! Everyone loved him, and they all enjoyed the game as well. 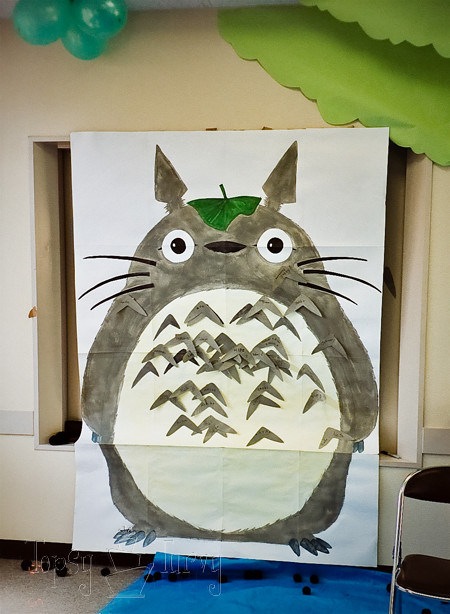 I also made a pinata. My first homemade pinata in fact! Lucky for me he’s kind of balloon shaped so it worked out decently enough. We hung him against the back wall and everyone was fascinated by it! In fact once all the kid’s got a turn the adults all wanted one too! It was a hoot! I wasn’t sure how many layers to make him so he ended up pretty strong. He broke off his rope before he cracked! Once he broke off the rope they kept taking turns hitting him until he finally broke open and we spilled out the candy! 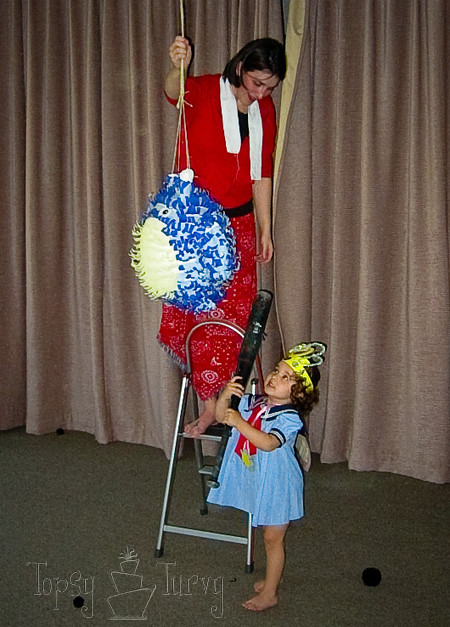 Another game was guess how many Soot Sprites! This is what Soot sprites look like in the movie. They are these fuzzy black sprites that leave a black mess everywhere. They live in abandon houses and move out when there is happiness in the house. An adorable character. 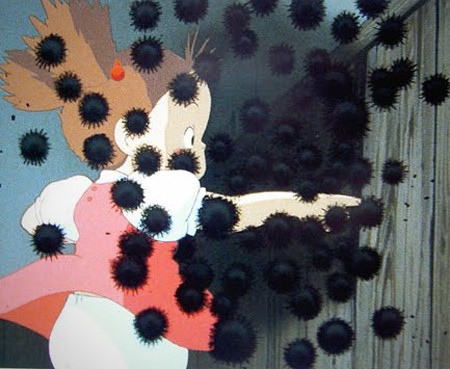 I used yarn and made my own. I made a LOT of yarn balls, 179 in fact. I spread them all over the floor in the party room by tossing them all over the place. I made a few different sizes in the beginning, but it was easier and faster to make them all the same. I considered adding eyeballs to them all, but I couldn’t find enough goggley eyes! 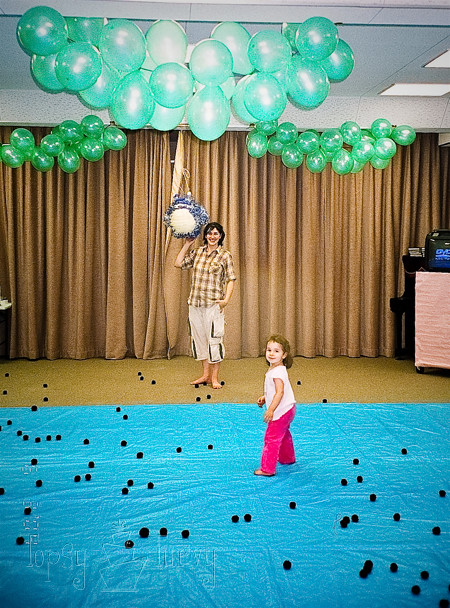 Then we had people guess how many there were. We kept track of the guesses on the white board. The guests had fun drawing and decorating the board for me. Funny thing was we had a tie for the winner! 7 above and 7 below! AND they were a married couple so they shared the prize! 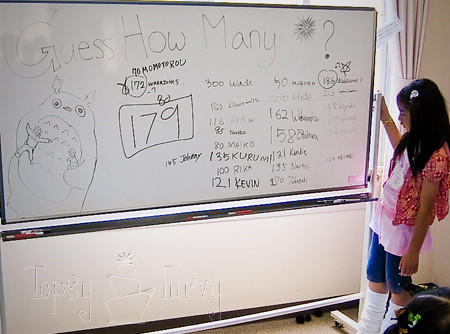 I had prizes for each game, a smaller totoro puzzle, and of course party favors. In the movie Totoro gives the cute little girls a folded bamboo leave with various nuts in it. So I made over 40 of my own bamboo/nut packages and attached a totoro cell phone charm to it. They all seems tickled with the idea of a favor and the whole party went over well! 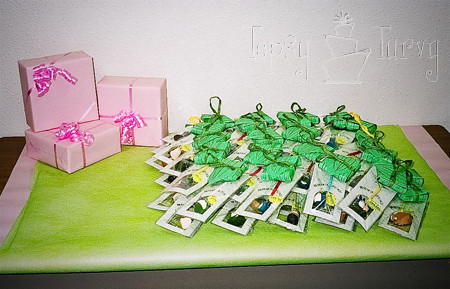 Since they like healthy food in Japan we mostly had fruits and veggies, but I did make my own totoro shaped cookie cutters and made cookies and cupcakes. BUT my camera died. TOTALLY died. Most of these pictures are from the night before the party when I was setting up and a few from my in law’s camera the day of the party. BUT this is the only picture of the food. Sad, I know! There always seems to be that one thing that when I sit down to blog about a party of craft I realized I didn’t get a shot of! SO frustrating! But it is what it is! Over all the birthday girl had a great day, my in laws had fun, the members of our church and neighbors all enjoyed participating in an American birthday party and I was happy with how well it went. Can’t ask for more than that! 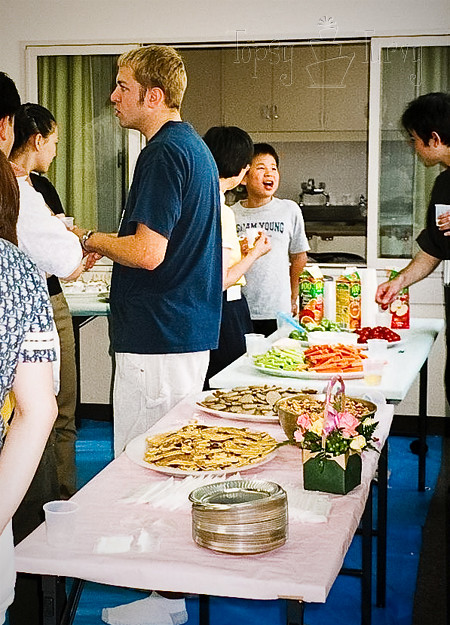