I’m sure there is a more “right” way to make these, but since I had a hard time finding a tutorial I just made it up. I think they are a little too full, so I’m going to try to make it with a few less petals and see if I get the desired results next time, but since we wore these with our Costumes I wanted to get this up! 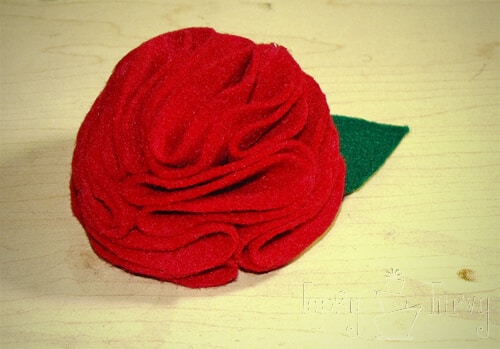 You want to start out with some felt, and a stencil! I used a plastic round lid. Remember the flower will be the same size as your petal so pick the size you want! I doubled up my fabric and marked it up! 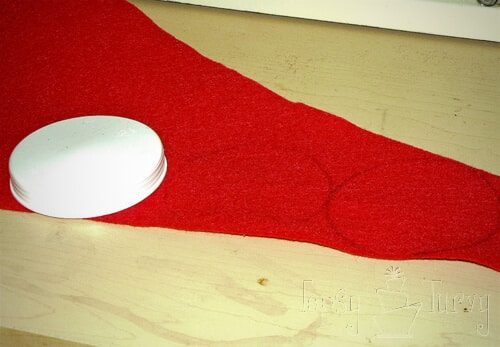 Then cut them out! I cut a TON of petals, knowing I might not get it right the first time,and also wanting to make three flowers at least. So I just cut and cut and cut! 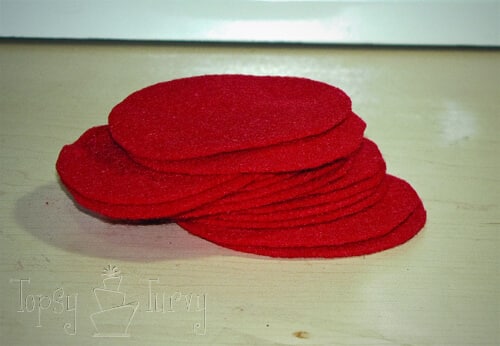 Next we begin the folding to create the ruffled felt petal shape. First you want to fold it in half, pretty easy. 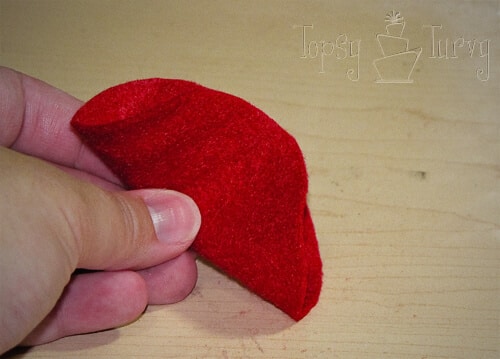 Next we want to fold it in half again, so we have this folded quarter circle. 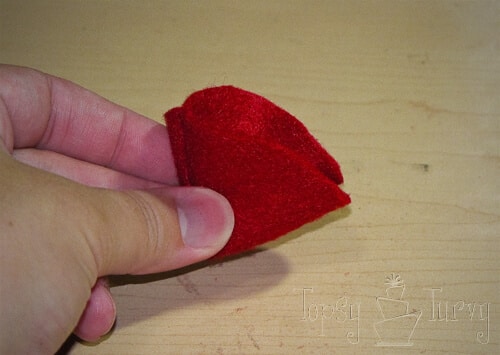 At this point you can go on to make flowers, ruffled pillows, ruffled wreaths, etc… In fact this was so fun I’ll probably make a few of those myself! Lovely. But for me it’s time to stitch the bottom of the folded petal to hold it’s shape. Most places suggest you hand stitch. BUT having my machine RIGHT here I figured I might as well try sewing it! So I ran the bottom 1/4 inch though the machine 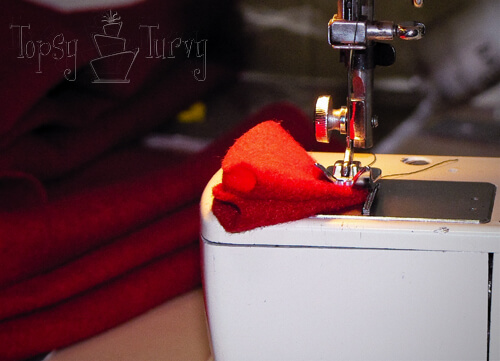 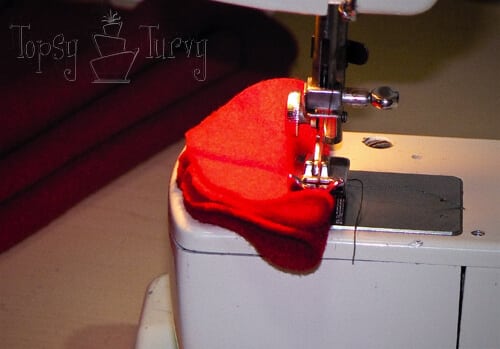 So I made a circle, sewing 4 petals together. Then I made a second circle of four to place as a second layer. 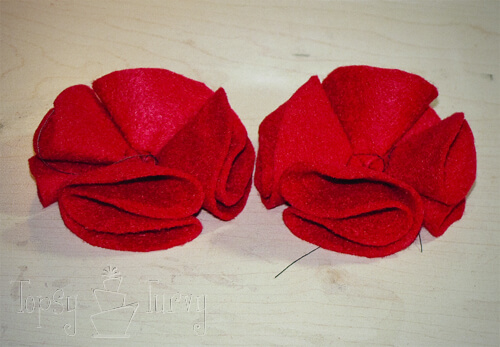 stacking these two layers together it was clear that I needed a center of some kind. A single petal didn’t seem right. SO I sewed two together to try that. 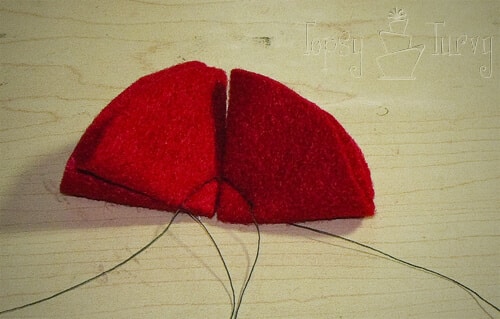 Now I folded those two together. It seemed to fill in the gap I was having in the other layers. Next time I’m going to try one in the center, 3 in the middle and 4 on the bottom. I think that might solve my too full feeling I’m getting from these flowers. 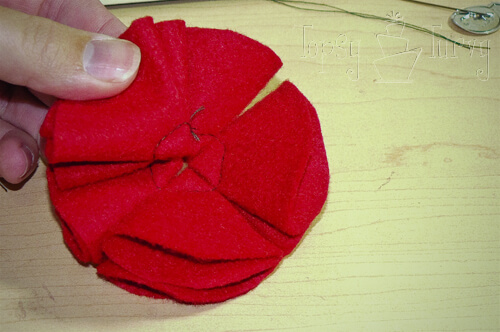 I placed the center two petals in the middle of the middle round of four. 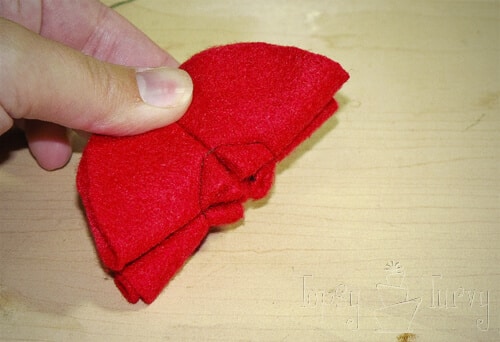 now I used my machine again to stitch the center and the middle row together. This was SUPER thick and hard to sew, BUT I’m amazing and I did it! This was the last time I was able to use the machine, because it’s so thick. I might have stopped right there, maybe I should have. I wasn’t sure it was quite big enough, so I got ready to add the other layer. 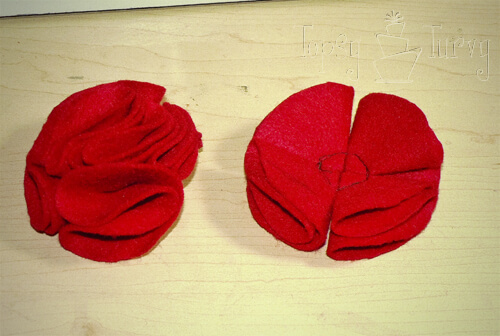 This layer I had to hand sew of course. Now it’s HUGE! Still debating the right size for hair clips vs pin vs bag decorative attachment. The next step is adding some greenery, cut out a leaf shape, cut a slit so you can overlap it to create a 3D effect. 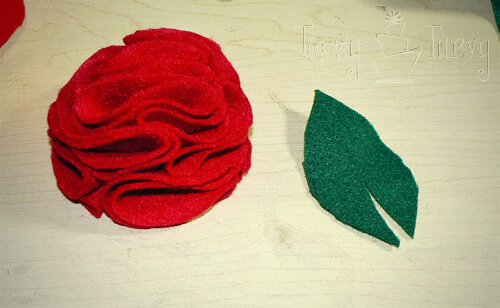 Sew the leaf to the bottom of the flower and now is a great time to also sew your hair clip/pin/rubber band/headband on! Or sew it to a purse, or other accessory. 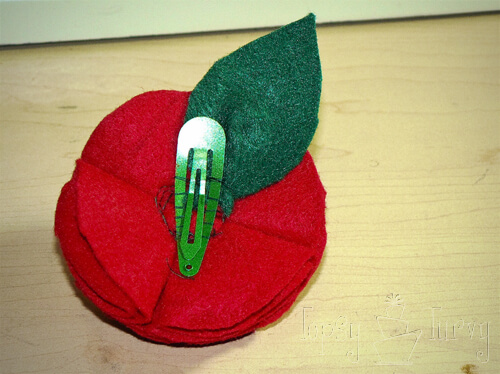 And your done! Wear however/wherever you’d like and have fun! I’m still not 100% in love with these, BUT in love enough for now! And they looked great with the girls ponytails! 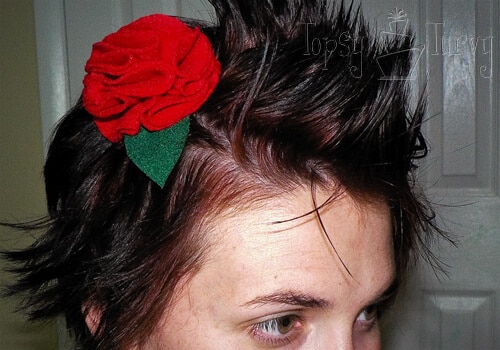