Hey!  It’s Missy from Missy Dear again!  For awhile now I’ve been wanting to try this project.  I’ve needed a little tray for my jewelry but hadn’t been able to find something I liked. 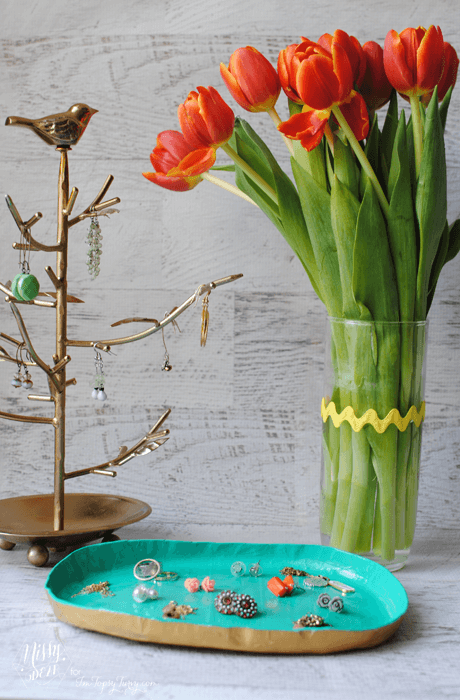 I have an oval casserole dish that was the right shape, but it was too chunky and the sides were a little taller than I’d like.  So I thought, “Hey, I can just use that for a form and make my own.”  So that’s what I did. And I thought I’d make a great little paper mache jewelry tray tutorial for you all to join the fun :). 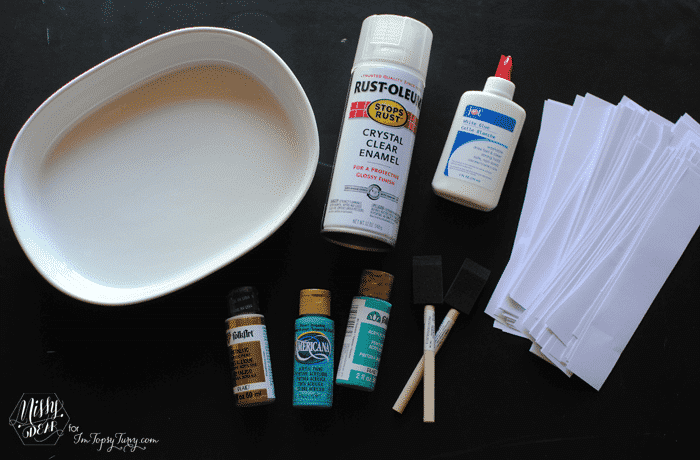 First I gathered up my supplies:
-dish or other object to use as form
-white glue (I got mine at the Dollar store)
-strips of paper (computer paper will give it a little more strength and make it easier to paint than newspaper will)
-craft paint and brushes
-enamel clear coat spray
-plastic wrap (not pictured)

First things first, you need to lay a piece of plastic wrap in whatever you’re using as your form.  This will not only keep your project from permanently gluing itself to the dish, but it will also make getting it out way easier.  Now you’re ready to paper mache. 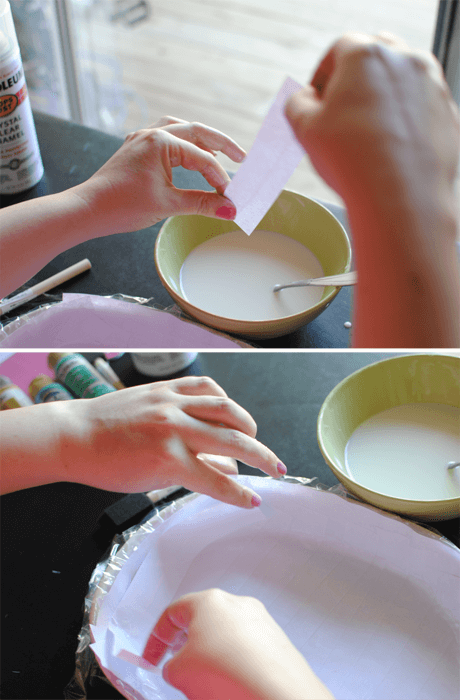 If you’ve never done paper mache before it’s a fairly simple process.  You just coat the strip of paper in a mixture of the white glue and water (I dipped it into a bowl and squeezed off the excess with my fingers).  The paste I made was 3 parts glue to 1 part water.  Once the strip of paper is coated in the paste you just layer it into the dish.

One thing I did that I think really helped is that I alternated the way I laid the strips.  So on the first layer I did them horizontal to the long sides of the dish, on the next layer I did them vertical, and on the third layer I did them diagonal. I repeated each of those layers twice (for a total of 6 layers) then I let it sit for about 2 hours while I took my daughter to T-ball practice (for the record, a bunch of 5 yr olds playing t-ball is pretty adorable).  Once I was home I did about 10-15 more layers, alternating the direction of the strips with each layer.

Now the longest part of the process – the drying. 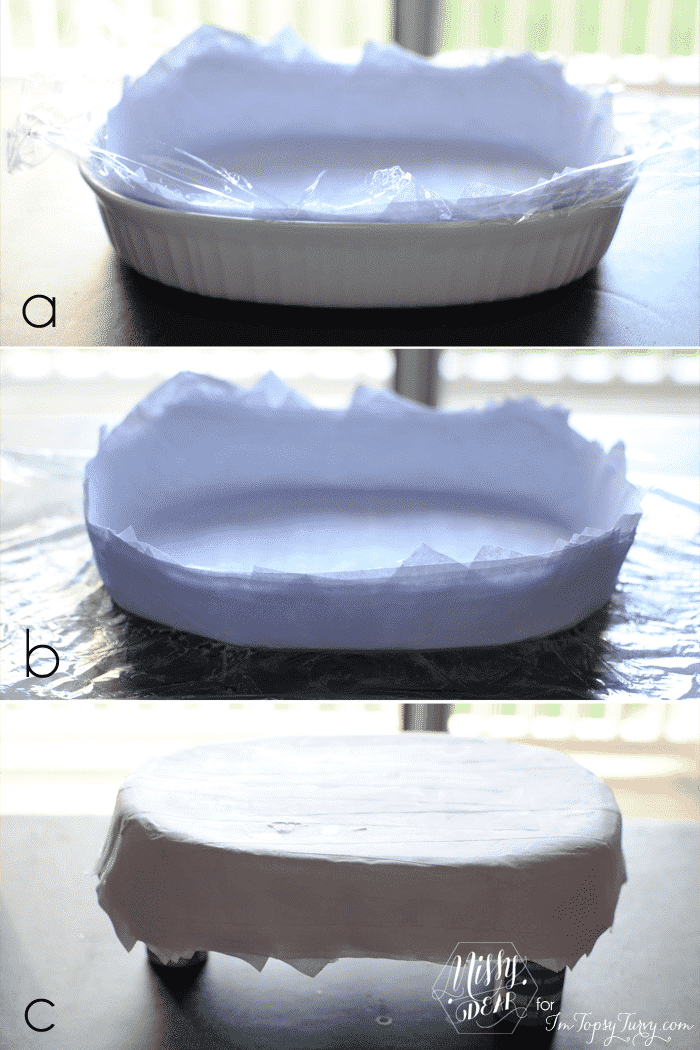 First I let it sit on the form for a few hours (a).  Then I took it out of the form and peeled the plastic wrap off the sides and let it dry for a few more hours (b).  Finally I took if off the plastic, flipped it upside down and “hung” it from some paint bottles to let it dry over night (c).

Here’s another tip I learned the hard way – use an even number of paint bottles.  I only had one on one side and two on the other so it dried with a little warp in it.  I had to leave it the whole next day with something heavy in it to try to get the warp to straighten out, which only helped a little. 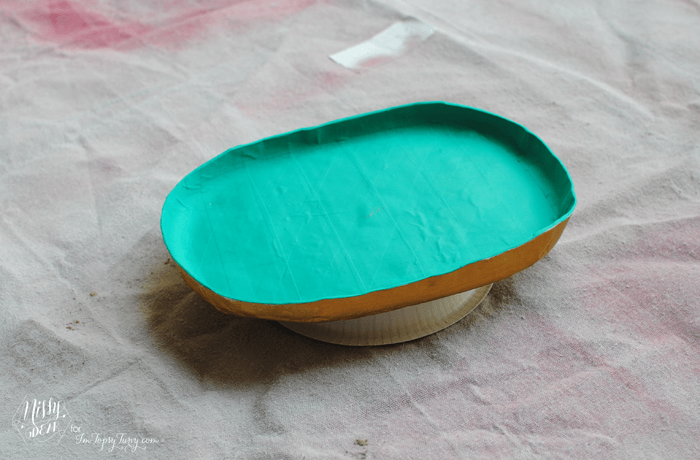 This next step was the one that required the most brute force – trimming the sides.  In wanting the tray to be sturdy enough, I had used a lot of layers.  Which worked great, it is very strong.  However, I had the hardest time trimming it down.  I tried every pair of scissors in the house – including some wire cutters and a little hack saw.  I discovered that my kitchen shears worked the best, but left a pretty jagged edge.  Nothing a little sanding couldn’t fix.

Then just paint, let that dry, then spray with a clear coat.  I chose an enamel clear coat because I was going for that really high gloss look. 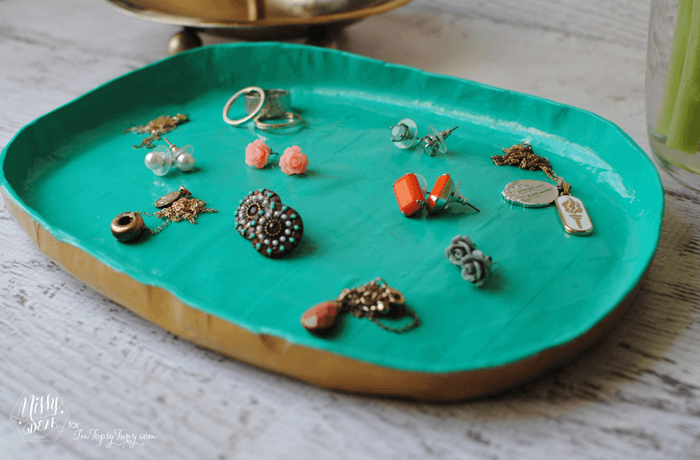 And there you have it, a gorgeous little jewelry tray you made all by yourself.  Maybe now that all my jewelry is laid out where I can see it I might wear it more often.

What do you think?  Is it something you might want to make for yourself too? 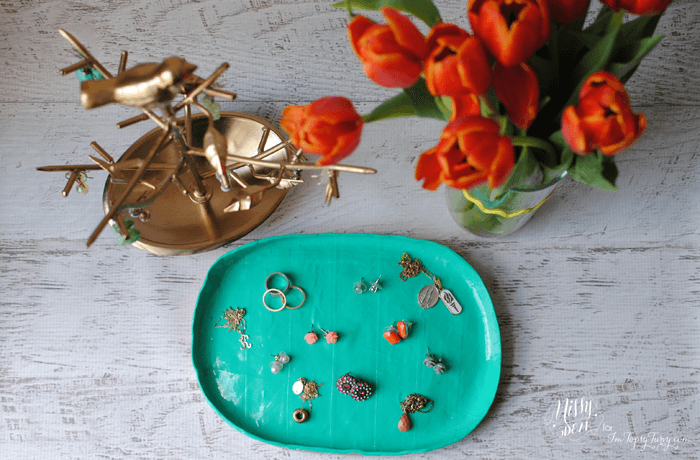 Well, if you do make one remember to let me know about it!  I really would love to see it.  You can find me pretty much anywhere, but here are some handy dandy links just in case 🙂