Our church places a huge emphasis on food storage, and that leads to a lot of canning. Although my mom never ever EVER canned. So I never learned and it seemed very daunting. I’ve always wanted to try, but I’m not really a jam eater, or fruits and veggies for that matter. So I never thought there was anything for me to can. But when my close friend bought a pressure cooker and decided to try it I thought I would join her. And when the opportunity came up for 60 lbs of organic tomatoes (each) we decided to make a day of it (that turned into two!)

Here are my supplies (above) and our tomatoes (below).

The first thing we decided to make was pizza sauce, it had to simmer for awhile so we figured we should start it first. It was a LONG process. First boiling tomatoes then straining them to get rid of the seeds and peels. It was long and messy.

THEN adding the herbs/spices and boiling/simmering it down to HALF. We thought it would take a few hours, but it turned into like 6-8 hours! It was 2 am before I was done! CRAZY! Looks good though, huh? 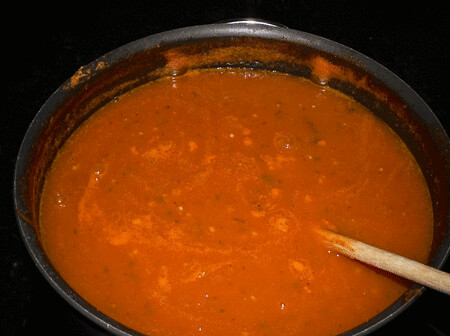 While that was simmering away we decided to make a salsa. Check out all these chopped tomatoes! Looks good huh? (not really, I don’t even LIKE tomatoes! But I like tomato based stuff like what we’re making).

This one was a Spicy Salsa. Neither of us are into chunky salsa, but that’s what the canning book called for. We couldn’t risk blending it up and messing with the balance for canning purposes. So we’ll blend it up when we open them (hoping that we’ll actually HAVE power and a blender when we open them and it isn’t the “last” days, he he he!)

This was not pressure canning, but water canning???? I don’t really understand it all, but just followed the instructions!

The next day went MUCH faster, this was the Zesty Salsa! And with that I was out of tomatoes (I did double batches of my three recipes.)

And finally we ended our canning run with a tomatillo salsa! This one we made together and it went AMAZINGLY fast. We probably should have done a few of the others together, oh well, live and learn.

And the end product of two days, it doesn’t look like much, but we don’t go through that much salsa, so it is at least a years worth (they only last a year, so it IS a year supply whether we eat it all or not). And we make a lot of white pizza, but not red, so that will be fun too! Yeah for me!