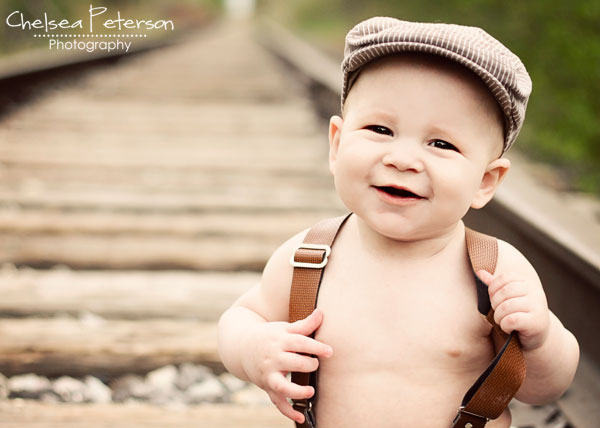 He’s actually already 7 months old (CRAZY) but it’s been so busy around here I’m FINALLY getting his 6 month pictures up!  I have to say I have a pretty handsome little man…  He looks like such a great mix of my other kids.  A lot of Computer Boy (who in turn looks like my dad and I) but at the same time some of the other three as well.  And could those suspenders be any more adorable? 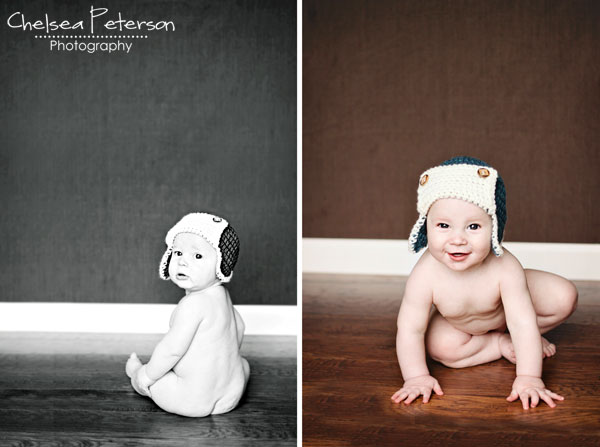 I am making a few of these hats for my sisters photography business, but I was running behind making one for Baby Boy and I actually bought this cute crochet aviator hat from Maybe Matilda at the Queen Bee Market at SNAP the weekend of his 6 month birthday!  Man he has a big head, the 6 month size BARELY fit… But I love the blue color. 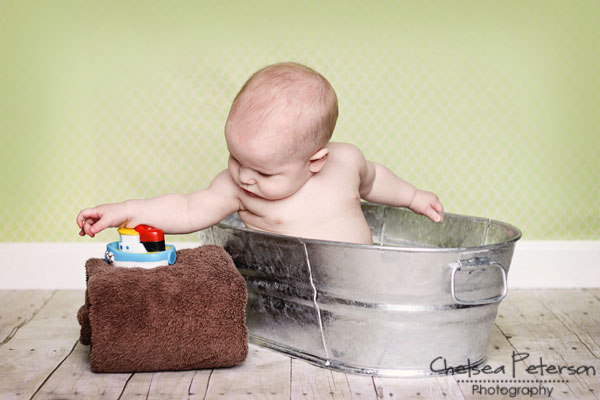 AHHH!  I love nakedness on babies…  so so SO cute.  He kept trying to stand and show off his “man-hood” so we had to add a toy to keep his attention!!!  Oh how I love this sweet boy!  He loves taking showers with me and love to cuddle.  He has got to be the happiest baby on the planet, even when he’s upset he’s full of smiles! 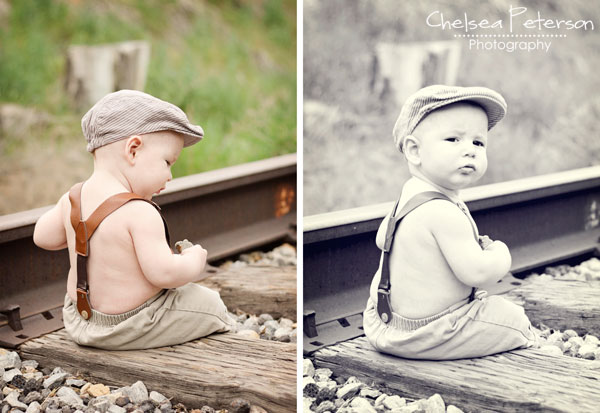 He loves eating things, rocks, plastic, toys, etc… EVERYTHING but food…  he loves Ice Cream but refuses all baby food AND he refuses paci’s so I tend to nurse A LOT.  He’s obviously not suffering- sweet fat little thing- he’s already wearing size 9-12 month clothes.  And honestly I don’t mind being the only thing that can comfort him when he’s upset, but it would be nice if he’d take a paci… 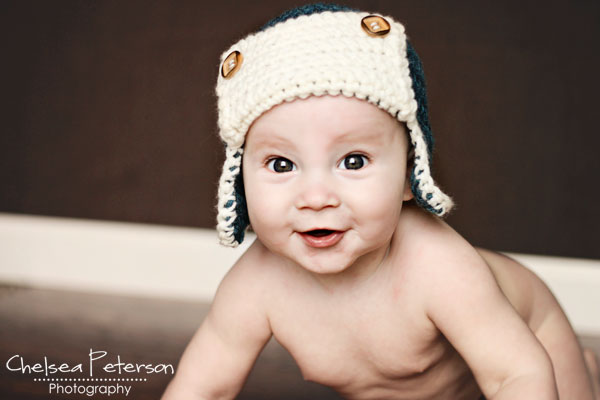 He’s has so many fun expressions, so many different smiles, and so much joy.  He really brings a level of happiness and joy to our whole household.  I’ve said it before and I’ll say it again, my only problems with this stage (0-2 1/2 years old) is how stink’in fast it all goes.  I an cherishing every cuddle, look, drool, cry, nuzzle, bite, etc… 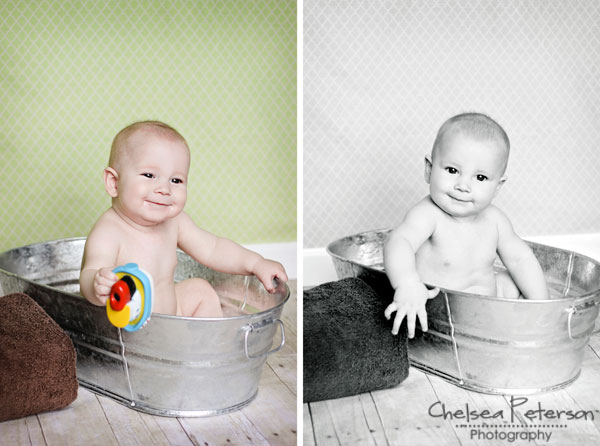 He sat at 4 months and started “crawling” a week before he turned 6 months old, by the time we took these pictures a week after his half birthday he was officially crawling all over the place, he follows me around the house now, and loves his new found freedom.  He never stays still and we’re constantly reminded of a new level of cleanliness for the floors.  I’ve found some pretty interesting things in his diapers recently! 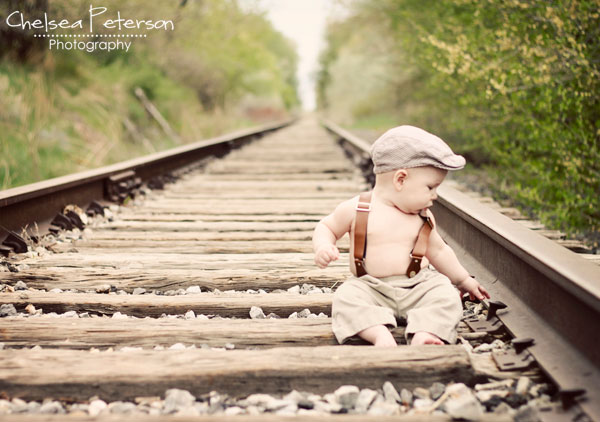 He loves to give kisses, and I love receiving them, drool and all!  And often Snot too!  He’s been congested since birth, but he doesn’t let that stop him from being precious!  He makes snot look good somehow!  And a BIG thank you to my sister Chelsea Peterson photography for taking the pictures!) 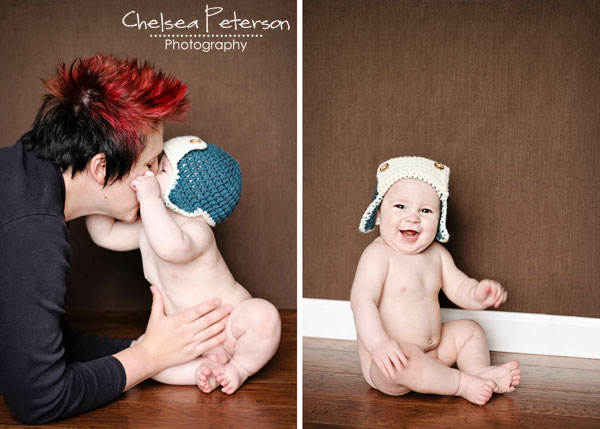 He’s discovered his toes and loves to pull and chew on them!  He no longer stays laying on his back for diaper changes, but he’s constantly rolling over, so it’s got to be quick once start.  Thankfully he hasn’t started putting his hands down there during diaper changes yet…  YET… 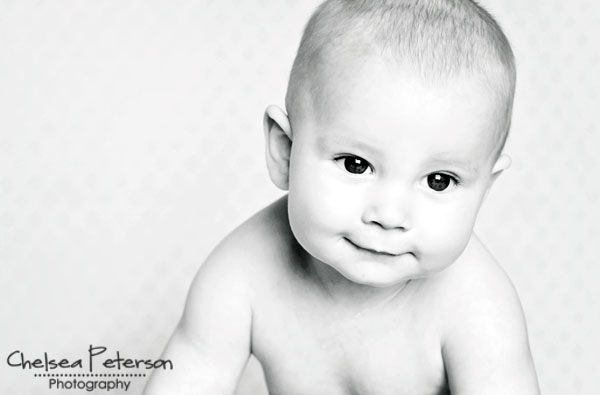 He has such lovely eyes, make everyone melt eyes.  And he’s discovered his reflection, he loves flirting with other babies, esp himself in the mirror.  He’s also discovered that things don’t dissapear when he can’t see them.  He goes looking now!  Sometimes it’s a toy under a blanket or me in a room around the corner!! 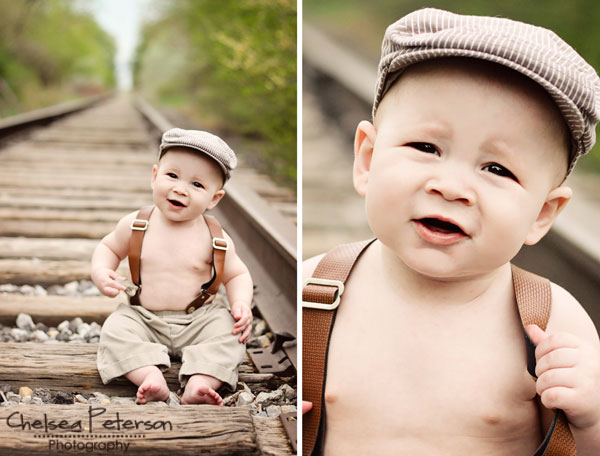 Seriously, could you say no to this face?  Me either, he’s spoiled rotten in all the best ways, lots of love and cuddling, from me, dad, siblings, grandparents, and aunts.  We’re so blessed to have so many family member close by so he (and the other kids) can be so loved and appreciated! 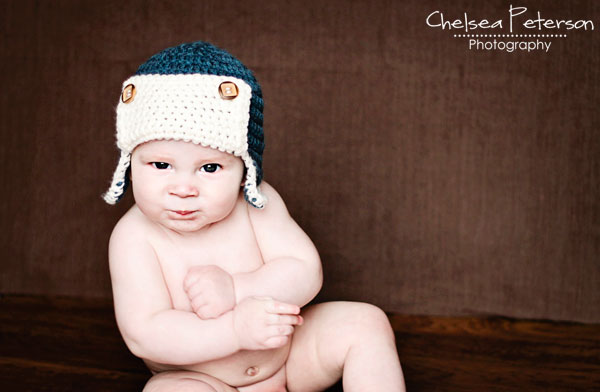 It’s a funny face, but I love it, his sweet little pursed lips and his crossed arms!  He’s learning to wave and clap right now, we’re pretty far from mastering it, but the attempts are pretty fun!  He’s also babbling, his ma-ma-ma-ma-ma warms my heart to no end!  Da-da-da-da is pretty darn cute too! 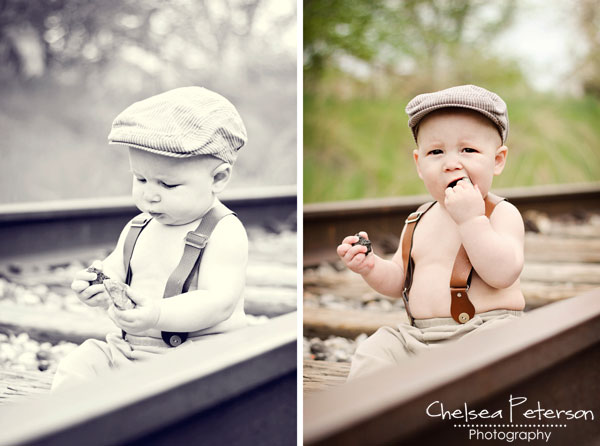 The last six (seven) months have been my happiest yet, I am so so SO blessed.  Not only do have my dream job, a mom, but I have such a wonderful life.  I love my husband, he loves me, we have wonderful, happy, healthy children, a job, a place to live, friends.  Does it get any better?  I doubt it.